Windows 8 (and Windows Server 2012) introduced a new debugging transport called KDNET. As the name implies, it allows kernel debugging over a network and can be faster and easier to set up than its predecessors (e.g. COM and IEEE 1394).

MSDN has great background information on setting up kernel debugging via Visual Studio and by hand, however, Microsoft's official stance on virtual machine debugging is to continue using the old and slow serial port. Even on generation 2 virtual machines. This makes some tasks, like dumping memory or resolving symbols, a slow and tedious task.

But unofficially you can instead use what's internally referred to as "synthetic debugging". 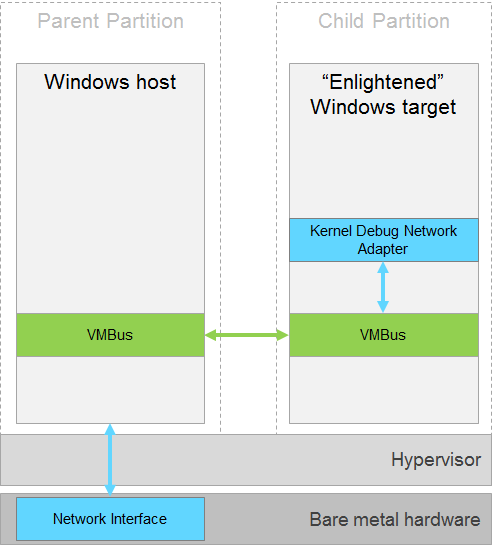 To understand how it works, first consider a common KDNET scenario on a physical machine. When KDNET is enabled, the Microsoft Kernel Debug Network Adapter built into Windows takes over (and shares) the physical network device installed in the machine. Communication to and from the machine (and kernel debugger) occurs over the network as expected and life is grand. But virtualized environments (in child partitions) add another layer of abstraction to the underlying hardware that presents a problem -- the Kernel Debug Network Adapter cannot latch directly onto the physical network device.

Cue the magic behind synthetic debugging.

To set up synthetic debugging (for Windows), you need to be running:

When KDNET kicks in and detects the virtualized environment,
the HOSTIP and PORT parameter values are ignored, in favor of the
VMBus.

When the machine is powered on (or reset), the virtual machine's specific Virtual Machine Worker Process (vmwp.exe) will attempt to bind to that port on all (management) interfaces.

When not configured correctly, synthetic debugging can be quite a pain to troubleshoot. Here are some tips if you run into problems: